The name Revelstoke is known and revered among skiers worldwide.

The sport of skiing originated in Scandinavia, and it was the Scandinavians of Revelstoke who originally brought the sport here. The first skis in Revelstoke were described as “Norwegian Snowshoes”; they were wooden skis made of barrel staves. In 1891 the Kootenay Star described the “snowshoes” as “thin slats of wood about three inches in width and ten feet in length, and turned up in front like the bows of a canoe”. Some locals found skis to be well suited to travelling over the snowy landscape at a greater speed than on snowshoes.

In the early 1890s, the first recreational ski club in Revelstoke was formed. At first the sport was not as popular as other winter pastimes, but by the early 1900s enthusiasm for what was then called “ski running” began to grow. Downhill skiing behind Long’s Brewery was a popular way to get downhill turns.

Two Norwegian families, the Gunnarsens and the Nelsens, are credited for skiing’s rise to popularity in Revelstoke. These families were enthusiastic skiers who drew international attention to Revelstoke’s burgeoning ski scene. Anna Gunnarsen, the Gunnarsen matriarch, was a talented ski racer and organized skiing events and competitions in Revelstoke. The Nelsens were talented ski jumpers, succeeding in local competitions, and ultimately Nels Nelsen held the Canadian record for ski jumping. While a ski club is known to have existed in Revelstoke as early as the 1890s, the Revelstoke Ski Club was officially formed in December of 1914. It had 30 members, and was primarily about competitive skiing. In 1915, the club organized Revelstoke’s first Winter Carnival, which boosted the popularity of skiing in Revelstoke. By 1917, the membership of the club had increased to 300.

The ski competitions organized by the Club pulled in prominent figures in the growing ski world, and soon Revelstoke was hosting provincial, national, and international ski competitions. The Revelstoke Ski Club is still active today. Skiers at starting line of a race on Mackenzie Ave in 1925.

The Big Hill and Ski Jumping.

During Revelstoke’s first Winter Carnival, Thorlief Iversen, president of the National Ski Association of Canada, and local ski jumper Nels Nelsen, identified a spot on Mount Revelstoke that could be used for a larger ski jumping venue. The City of Revelstoke and Board of Trade contributed $1200 to the construction of the ski jumping venue. The ski jumping event at the 1921 Winter Carnival attracted over 3,000 spectators. It was a site that saw famous international competitors from abroad, and world records were set. The ski jumps were used for competitions until 1975. The hill was later nicknamed “Suicide Hill”, and today if you visit the art installation known as “Nels’ Knickers” you’ll see why - standing at the top of the jumps looks truly terrifying.

For the beginners and jumpers without nerves of steel, the Big Bend jump was created. Its takeoff was not as steep and was a great place for ski jumpers to hone their skills.

Ultimately, Revelstoke was found to be better suited to powder skiing than ski jumping. Ski jumping required smooth landings and skiers would have to consistently pack down the landings for the jumps.

The Tournament of Champions.

The growing fervour for skiing was interrupted by the Second World War, and those who remained home in Revelstoke did their best to keep the enthusiasm alive by involving high school students in skiing. After the war, the Revelstoke Ski Club was ready to organize further ski events. Parks Canada and the Revelstoke Ski Club rebuilt the Big Hill to meet international standards and renamed it the Nels Nelsen Hill. In 1950, the first Tournament of Champions was held. The event went on to attract competitors from around the world, and was even televised.

Crowd of spectators at Mount Revelstoke circa 1957. A cross country skier in downtown circa 1925. 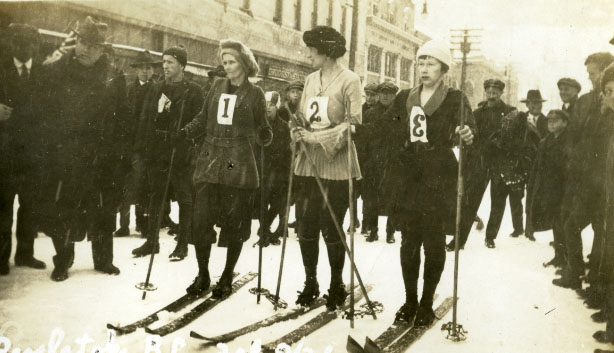 A ski tournament on Mackenzie Ave in 1921.

Backcountry skiing became a popular pastime, particularly at Mount Revelstoke. Skiers would ski in large groups, meeting at City Hall, to go on to conquer the summit. Skiers would often stay at Heather Lodge in the alpine meadows, using it as a base for ski touring and summiting. In 1941, a film called Beautiful British Columbia was filmed at Mount Revelstoke, showcasing the beauty of backcountry skiing to the world. Heather Lodge was purchased by the National Park and taken down in order to preserve conservation values. Today, backcountry skiing is much more popular in neighbouring Glacier National Park. The Beginnings of a Modern Ski Hill.

Ultimately, the logistics of grooming and the cost of maintenance led to a decline in ski jumping. Backcountry skiing and nordic skiing maintained their popularity. Downhill skiing also continued to be popular, and several slalom and downhill runs had been established. In 1947, a rope tow was established and accessed a run called the Don McCrae downhill, just over 2.4 kms long. A beginner hill was also established and called the Hickory Run. These first runs were on the lower slopes of Mount Revelstoke. In 1961, a poma lift was built on Mount Revelstoke which allowed skiers to access both the slalom runs and the ski jumps.

Mount Mackenzie was a great spot for skiing, but expensive to run. The hill was purchased in 1980, but in 1983 the ski hill went was on the company that owned the hill went bankrupt. Local business people formed the Mount Mackenzie Alpine Sport Society to try to keep the hill running. Thanks to fundraising efforts and grants from the City of Revelstoke, the ski hill managed to stay open. The City was effectively subsidizing the hill, and sought investors to take over. Ultimately the hill was bought by a group of Toronto investors in 2005, and in 2008, the new Revelstoke Mountain Resort opened, boasting the highest vertical of any ski hill in North America.

Today, skiers from around the world flock to Revelstoke to experience the terrain and deep powder of Revelstoke Mountain Resort, the solitude of the backcountry, the excellent trails of the Revelstoke Nordic Ski Club, and the amazing tenures of our many local mechanized ski operations.

Paul Mair at the top of Mt Mackenzie ski area.

View from the top of the T-bar on Mt Mackenzie.

Photos and historical content in this story were provided by Revelstoke Museum and Archives. If you would like to learn about Revelstoke's ski history, drop into the museum or order a copy of First Tracks, the perfect coffee table book.