Its triple peak dominates the skyline to the skyline from almost any viewpoint in town, marking the edge of the Monashee Mountains. Its unique shape is frequently represented by local artists, and is a ubiquitous symbol of Revelstoke.

The first record of the name “Mount Begbie” is on a map published by a surveyor named George Dawson in 1890. The name was officially adopted in 1900. The mountain is named for Sir Matthew Baillie Begbie. Begbie held the position of Chief Justice of British Columbia, appointed in 1870, one year before British Columbia became a province. Begbie first appeared in court in Revelstoke in June of 1885 (which was known as Farwell at the time). According to the Victoria Colonist, “His Lordship has won golden opinions from everyone here by his judicial learning and personal kindness… Sir Matthew expressed his unqualified satisfaction with the proceedings, and bore witness to the pervading quietness and order, and the remarkable absence of drunkenness.” At 6’5”, Sir Begbie’s height was as imposing as Mount Begbie’s 2,733 metres, rising straight from the Columbia River Valley.

Unfortunately Sir Begbie’s legacy is problematic. On the one hand, he was known to be an intelligent, cultured man: an artist, a choir singer, a mathematician, a cartographer, a sportsman, and a gardener. He learned some of the First Nations languages, introduced legislation giving rights to First Nations women and called for the recognition of aboriginal land rights. However, he was known as “The Hanging Judge”, sentencing the perpetrators of 27/52 murder cases he heard to be hung (at the time, the mandatory sentence for murder was hanging). The vast majority of the people he sentenced to death were First Nations men. He was known to be stern and harsh. Sir Begbie died in 1894, but his name lives on in Revelstoke. Sir Matthew Baillie Begbie, for whom the peak is named. 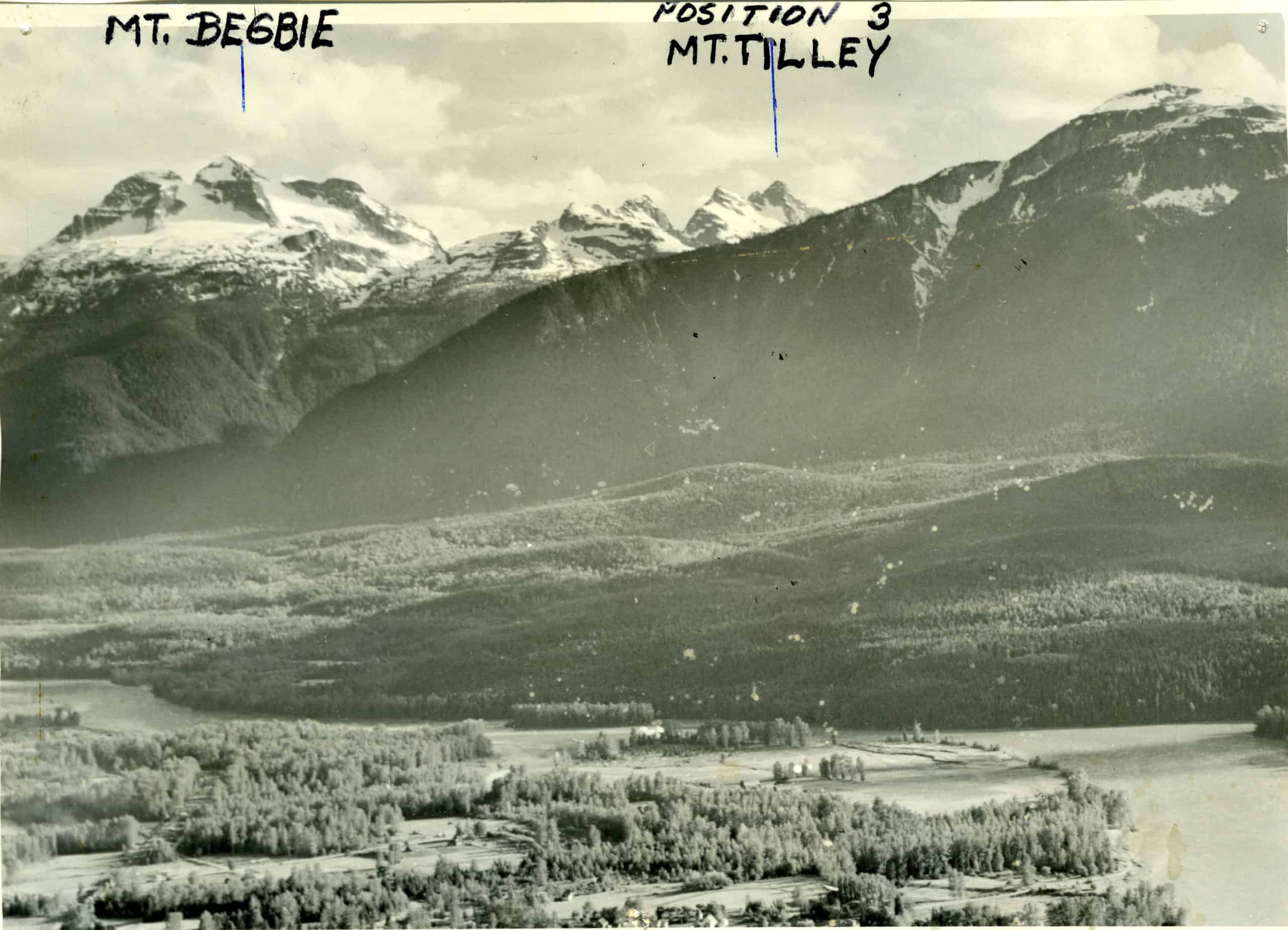 A historic image of the peaks of the Monashees.

The first ascent of Mount Begbie was made in 1907 by four men: Rupert Williams Haggen, originally from New Zealand, Rev. James Robert Robertson, originally from Ontario, Edward Feuz Jr., a Swiss mountain guide, and Rev. Doctor James Charlmers Herdman, originally from Nova Scotia. Haggen and Robertson were citizens of Revestoke and were instrumental in arranging the climb. Feuz was a highly sought after mountain guide, and would climb with a party of no more than four, all of whom were required to have climbing experience. All four were members of the Alpine Club of Canada.

On June 10th, 1907, the four adventurers set off from Revelstoke at 7:00 am. They borrowed a rowboat to cross the Columbia, and had to make two trips across the river to bring all of their supplies across. By 9:30 am they were ready to begin hiking; they donned their packs and headed into the dense rainforest. The following day they cleared through the underbrush and pushed on to the summit. At 4:00 pm on June 11, 1907, in the midst of a raging storm, the four men reached the summit. On their way back to Revelstoke, their rowboat capsized and made for a frightening and harrowing journey, but the men made a makeshift raft and they all managed to get back to Revelstoke.

Mountaineers on the Illecillewaet Glacier near Revelstoke.

In 1932, R. Lymburne made the first ski ascent of Mount Begbie. He must have been incredibly fit, because after leaving Revelstoke at 4:00 am he made it to the toe of the glacier at 8:00 am. He spent some time enjoying the skiing on the glacier before heading up to the summit. He gained the summit, dodging deep crevasses, and descended. He made it back to Revelstoke by 6:00 pm.

In 1910, members of the Revelstoke Mountaineering Club began agitating for a trail up Mount Begbie. Today, a trail leads to the alpine meadows just above the treeline. It’s a popular destination for hikers, although it is a bit of a slog requiring good fitness. Those with mountaineering experience can carry on up the glacier to access Mount Begbie’s peak at 2,733 metres. Please refrain from visiting Revelstoke for non-essential travel at this time. If you are in Revelstoke, please ensure that you are taking precautions to limit the spread of COVID-19 and following provincial health guidelines.  Please check current Provincial Health Orders before travelling.

Learn more about the Revy Rules
Previous StoryThe Defining Mountains of Revelstoke: Mount Revelstoke
Next StoryWhere it all began: over 100 years of ski history in Revelstoke

Please avoid traveling to Revelstoke for non-essential reasons at this time.