The tale of a town and the mountains that made it.

As a mountain town, we have a close relationship with the magnificent peaks that surround us; these mountains provide a playground for the outdoor pursuits we are known for and are visible from every angle. These are the stories behind the four defining mountains of Revelstoke.

With an 800 foot tow rope and an A-frame cabin at the base to serve as a coffee shop, Mount Mackenzie was opened to the public as Revelstoke’s new ski hill on Boxing Day of 1963.

Seven days prior, the Revelstoke Review released an article stating;

“the development of this mountain is unlimited and could in the future be a great addition to the many attractions which bring visitors to Revelstoke.”

How right they were! 1963 marked the beginning of our mountain’s journey to becoming a world renowned ski destination and home to the largest vertical in North America.

Mount Mackenzie was actually the second location for downhill skiing in Revelstoke. The sport had been growing in popularity since the 1940s with the town’s first ski jump initially established on the neighbouring Mount Revelstoke (read more on that below). Through the 1960s, the sport existed simultaneously between the two peaks until it moved exclusively to Mount Mackenzie in 1969.

Revelstoke Mountain Resort opened in 2007 with over 2000 skiers and boarders arriving for opening day. The resort continues to flourish through the seasons. The summer months offer wonderful hiking trails with the gondola making beautiful, family friendly alpine hiking easily accessible. The resort recently launched their first mountain biking product, a 5620ft cross country and downhill trail that takes riders from the top of the Revelation Gondola all the way to the bottom of the Resort. The history of skiing on Mount Revelstoke is as old as the settlement of our town, but it is not the only thing this mountain is known for.

The Revelstoke Progress Club was formed in 1912 with the goals of finding ways to promote our city to others. Through their formation they took hold of the notion of a national park and began lobbying the Dominion Government to protect the land and build a road to the summit. A short two years later, Mount Revelstoke National Park was proclaimed open. The day was April 28th, 1914. In a tone similar to the Revelstoke Review article mentioned above, Member of Parliament, Robert F. Green, said;

“… if we can make this mountain into a playground, to assist in building up a better, healthier, and more moral race of Canadians, it would confer a benefit alike on you and our successors.”

Thanks to their efforts, visitors and locals today can drive up a 24 kilometre paved road to the top of Mount Revelstoke and enjoy pristine, protected alpine landscapes perfect for summer hikes.

In the early days of skiing, ski jumping was the emphasis of the sport. The ski jump on Mount Revelstoke was internationally recognized as one of the biggest and best natural ski jumps to exist and ski jumping competitions were held on Mount Revelstoke from as early as 1915 until the late 1960s. It provided a great spectator sport for the community and hosted international jumping superstars including Nels Nelsen.

The mountain was also easily accessible to everyday skiers. So accessible in fact, there was a run located directly across from today’s La Baguette that people would walk up in the afternoons with their skis slung over their shoulders and lap until the sun set or their legs grew tired.

Located right on the edge of downtown, separated only by the Trans Canada Hwy, Mount Revelstoke is still easily accessible via the Tournament of Champions trailhead located behind Revelstoke Railway Museum. Head to our National Park's page to find out how you can explore Mount Revelstoke year-round. 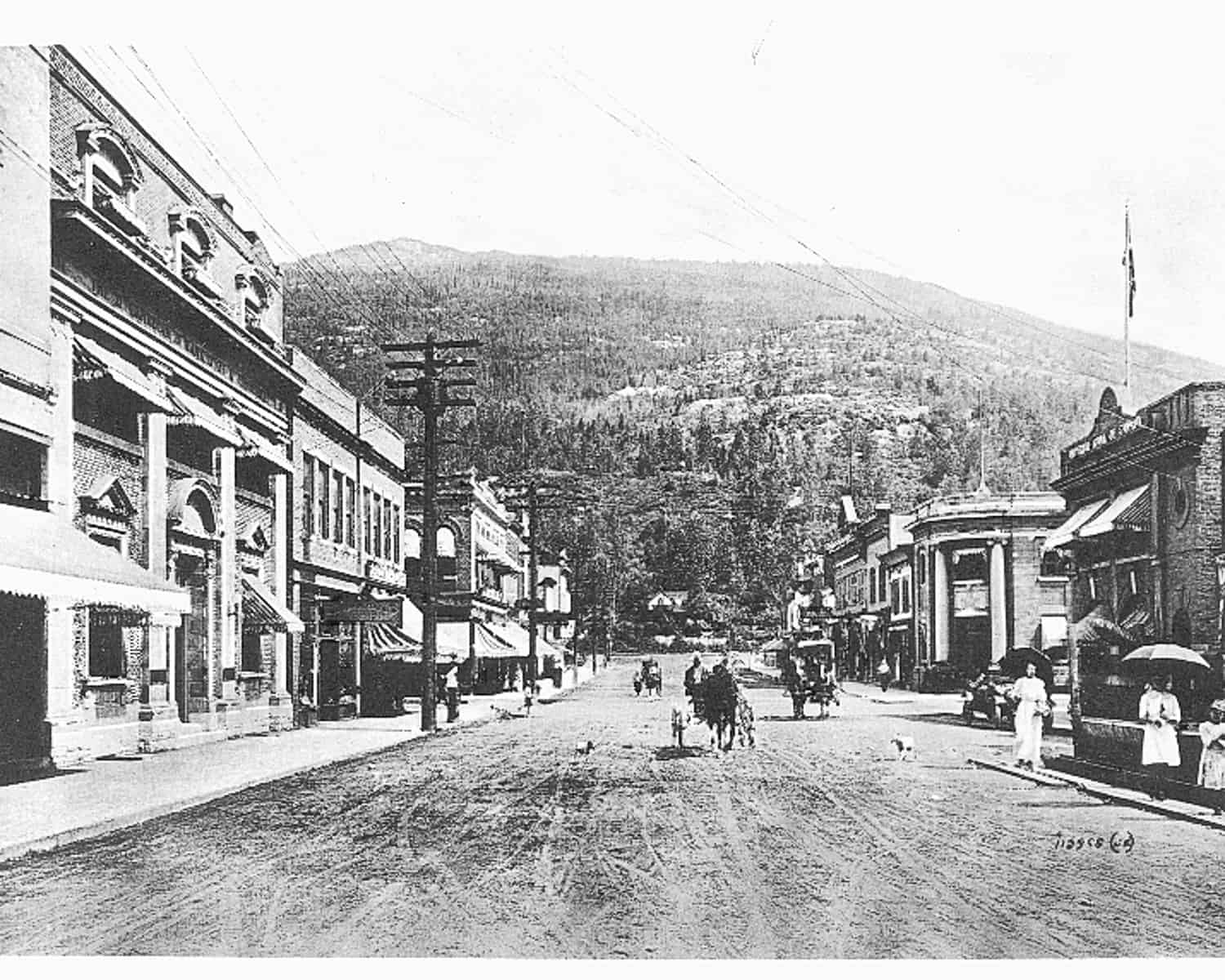 Along with multiple other Revelstoke titles, the spelling of Mount Macpherson is a common topic of debate. The mountain is named after Sir David Macpherson (lending to the lowercase “p”), one of Canada’s fathers of confederation who served as the Minister of Interior from 1883-1885.

Decades before it developed into Revelstoke’s local biking, touring and nordic skiing hotspot, the base offered farmers a place to work their land and generate produce for the people of the developing town. A school also once sat there for the children of Revelstoke’s early settlers. Revelstoke’s first recorded heli-ski trip was photographed at the base of Mount Macpherson in 1964!

This mountain is perfectly framed by Mackenzie Ave and located on the north side of the iconic Mt Begbie. With its impressive, triple crown visible from anywhere in town, Mount Begbie may be Revelstoke’s most iconic mountain appropriately named after an iconic historical figure, Matthew Baillie Begbie.

As the Supreme Court Chief Justice for the crown colony of British Columbia in 1858, his life and decisions are seen as controversial through the lens of history. For 12 years, Begbie was the only judge in the colony making him an extremely important public figure. He traveled through the vast colony wherever needed, working to establish law and order in developing settlements. Positive and negative elements considered, Begbie was as influential in our province’s history as the mountain is in Revelstoke today.

In addition to an impressive view, the mountain provides a playground of hiking, heli-skiing, mountain climbing and ski touring. The peak first appeared on an 1890 map in a geological survey of Canada on George Dawson’s map “West Kootenai” with the first summer summit completed in 1907 and the first solo ski tour completed by Revy local Bob Lymbourne. People continue to walk and ski in the footsteps of those who have explored the mountain in the past.

Head to our Hiking page to learn how you can summit this iconic mountain in the summer! BC requires full proof of vaccination for people 12 and older to access some events, services, and businesses. There are currently additional Provincial Health Orders in place in the Interior Health Region:

If you are in Revelstoke, please ensure that you are taking precautions to limit the spread of COVID-19 and following provincial health guidelines.