The Revelstoke Snowmobile Club celebrates its 50th year this winter, which has really got me thinking about how the sport has developed in all that time. It blows my mind that 50 years ago, the godfathers of our sport were blazing trail up the same riding areas that we go to today – with a fraction of the technology underneath them. The more I thought about it, the more I couldn’t believe it….so I sourced out a couple of our local legends, Ron Laroy and Dusty Veideman to get the low down on a typical day riding sleds in the 70’s. 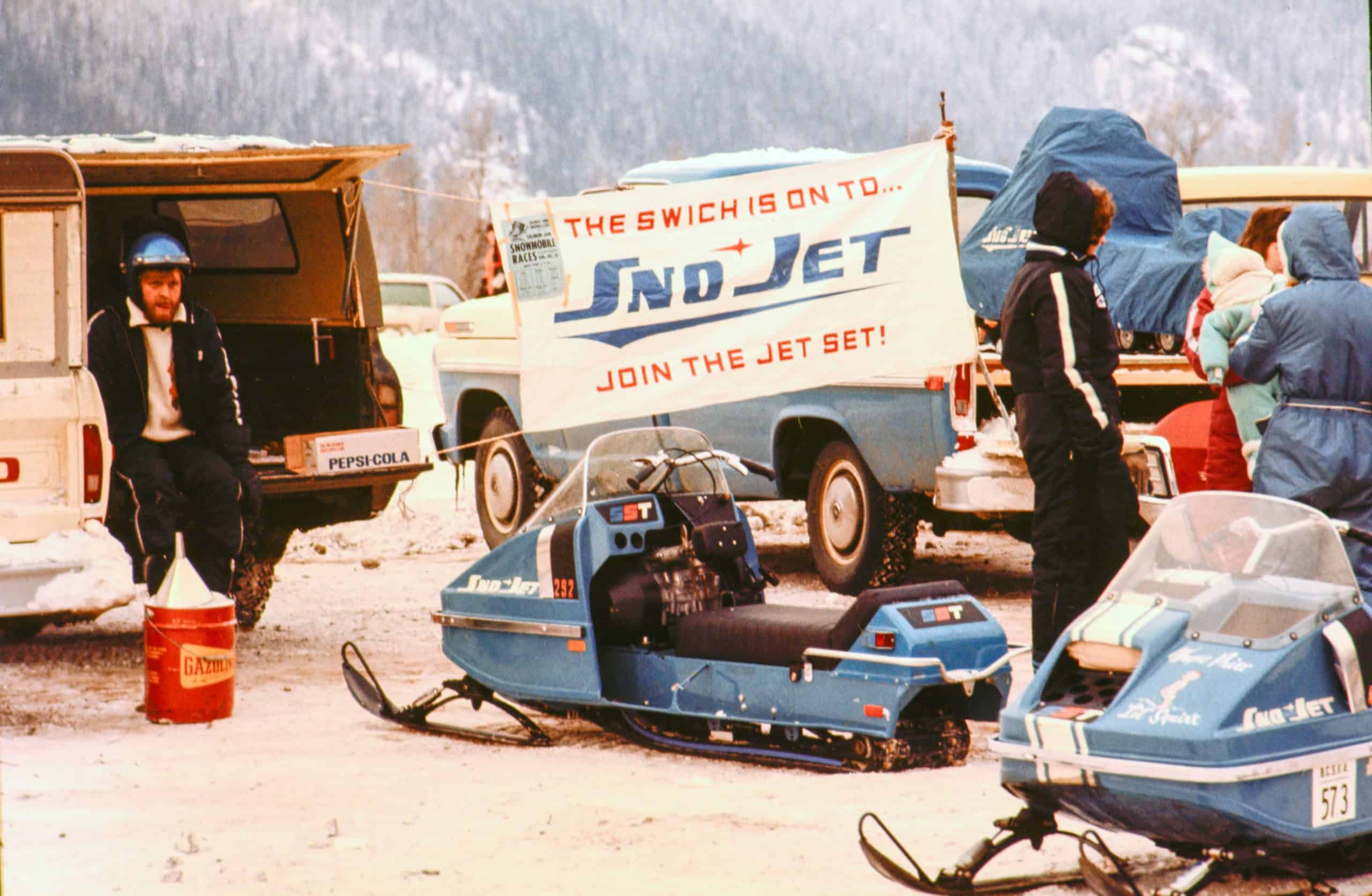 Ron bought his first sled in 1969. It was a used 1964 Polaris Colt, it had 12 horsepower and cost less than $500. Back then, the skis were made of steel so it was pretty important to have a can of spray Pam in your pocket to keep them lubricated and the snow from sticking to them. It was ok to pack the extra weight because you really didn’t have too much else with you – helmets weren’t really a necessity and neither was avalanche gear. The spare fuel made its way up on a skimmer that was pulled behind the sleds and the high tech gear consisted of felt packs and bread bags. If you were out riding, you really wanted to be there – it was not a fashion show like it is today about who has the best gear or who is the best rider. If you were one of the weaker riders, you were put in the middle of the pack. Dusty refers to this as his “Can-Doo” philosophy – if you see others do it, you can do it too – and if not, well, then the folks behind you would help you out. The main riding areas in these early years were Boulder Mountain and Mount Revelstoke National Park – where snowmobiling was allowed up until the late 70’s, when Caribou habitat protection was in its infancy. Ron, Dusty Veideman, Terry Fleming, Richard Comozzi and Don Hawker would load up their sleds in the back of their pick ups and drive as far as they could before unloading and starting the mission of breaking trail. The snowpack was typically 20 feet as Ron recalls and it would take 2 days to make their way to the area where Boulder cabin sits today.

Basically, they would bootpack 2 to 3 abreast until they were exhausted and then make their way back to the sleds and ride them up the packed trail. They'd have a short rest, then repeat the procedure until they made their way to the alpine. The carbureted machines were not quite designed for the mountains yet, so there was always a little wrenching going on as you gained and lost elevation. Specifically, the jets (which deliver just the right amount of fuel for the combustion reaction) would have to be swapped out on a regular basis.

As you can imagine with the temperature and pressure changes, and all that sciency stuff, a guy would have to pack a pocketful of different ones for a day's ride - and likely spend hours mucking around with it. The tracks were 40” shorter than they are today and there were no paddles on them – these guys were basically trying to ride lawnmowers through the Amazon. It wasn’t abnormal to drop into a little hole and wind up spending the next 6 or 7 hours just trying to get out. When a crux was reached, the group would either use metal bars they called “push bars” to attach all the machines together and use the energy of inertia to sling shot each other up the steep slope, or else they would pull out their lengths of rope that had knots every couple feet to physically pull the sled up the mountain hand over hand.

Absolute commitment. The amount of time and energy that went into getting the trail in, so that the rest of the community could make their way up with the wives and kids to have a hot dog roast on the lake, was exceptional. I have the utmost respect for these motivated riders that pioneered our sport. Today it takes me 10 minutes from unloading to get to the cabin on my Ski Doo that has over 160 horsepower in its stock engine and long track designed for ultimate traction and trail breaking. I can cross mountain ranges on one tank of fuel and not see or feel another track all day – dropping down, climbing up, through the trees and across the alpine. All with the press of a button to start my sled and a little leaning and throttle to steer it around. Although the sport has become much easier with the advances in technology and increased access into many alpine areas – the breed of humans remains similar. The pursuit of adventure and exploration lives on in this generation and the teamwork and camaraderie that is required to punch into new zones mimics that of the 60’s and 70’s – together we can accomplish more and we are lucky to live in this community that offers us an infinite landscape to explore and the machines to do it on. I have huge gratitude to the Ron’s and the Dusty’s for starting our sport off right and creating an amazing snowmobile culture in this beautiful town, Revelstoke – I only hope it lives on forever.

LEARN MORE ABOUT SNOWMOBILING IN REVELSTOKE
Previous Story10 winter activities in Revelstoke (that aren’t skiing!)
Next StoryThe winter the snow didn’t stop! (And we didn’t mind a bit…)